TEACHING SRT AT ROYAL NATIONAL COLLEGE FOR THE BLIND IN HEREFORD

In early March I, Gaby Agis, travelled to Hereford in the U.K ( near the border with Wales ) to teach two SRT classes. The first class I taught was for a large group of keen teachers, dancers, and locals from Hereford. Ages ranged from teens to 70s +. Everybody enjoyed the session greatly and drifted off into the evening asking for more classes and saying they felt sure they would sleep well that night.

The next morning I was delighted to be able to teach an SRT class at the Royal National College for the Blind. Some of the students are studying for a BTEC in Performing Arts, others were interested in dance. The group worked very intensely over the two hours and were left very inspired by their newly found ease and resourcefulness for their own movement both in the studio and out. I was also greatly inspired whilst teaching, knowing how little I had to alter the class for the visually impaired students giving me an even bigger awareness of just how profoundly democratic SRT is. 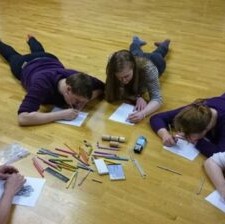